State Unitary Enterprise “Lisma” acquired the certificate of conformity for the ornamental LED filament lamp with B 35 flask and E14 cap. The certificate covers 2 and 4 W capacity lamps and colour temperature 2700 and 4000 K. 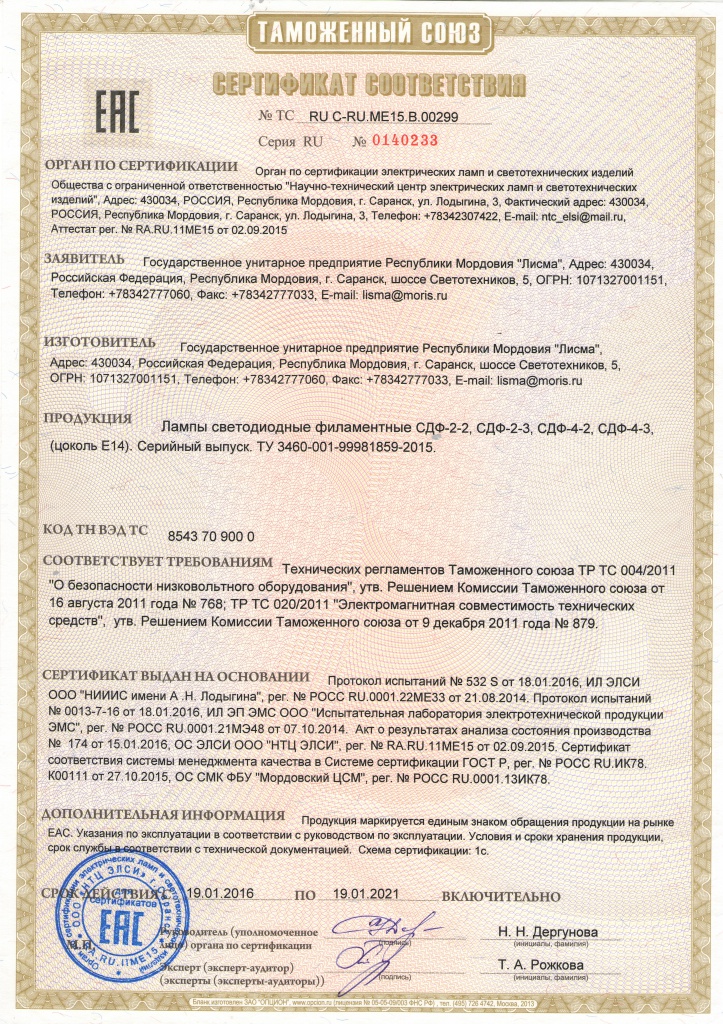 “Lisma” acquired the certificate of conformity, according to the European directive N 2006/95/EC, about the safety of low-voltage equipment for high-pressure sodium arc lamps SUPER. It allows us to export our products to EU countries, which is a very important step in our strategy of heading towards the markets abroad. 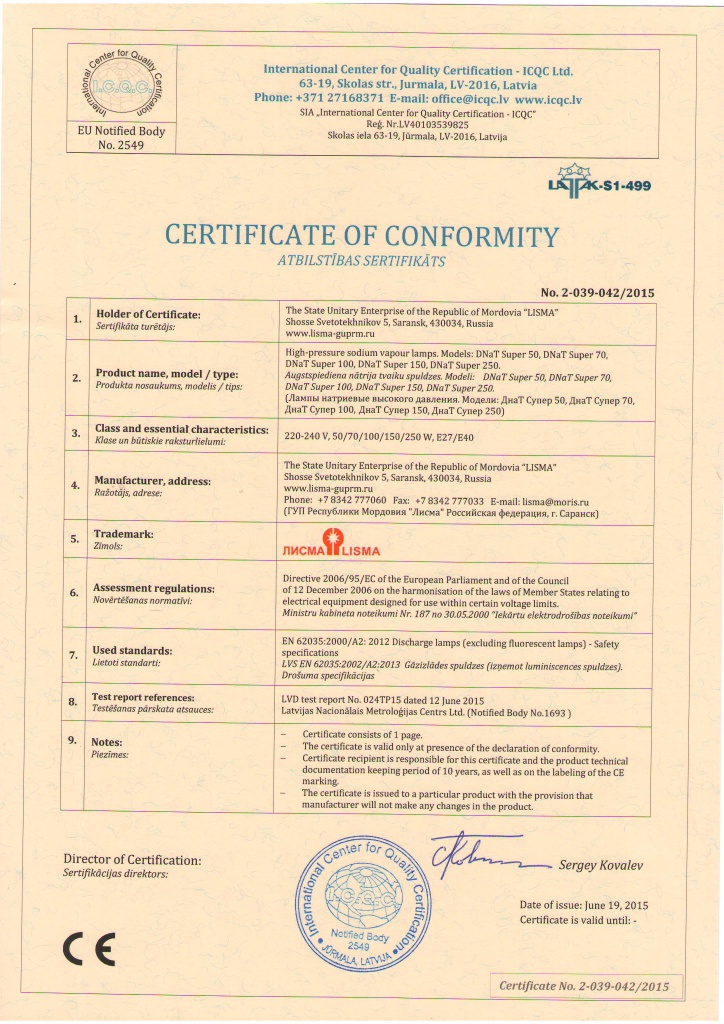 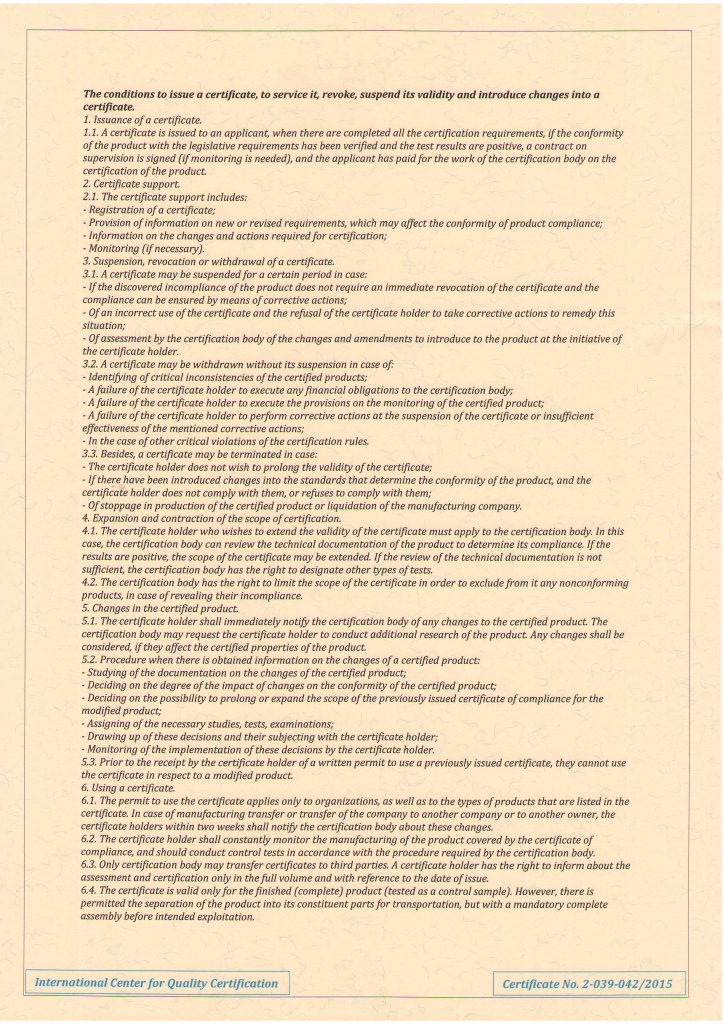 “Lisma” acquired the certificate of conformity, according to technical regulations of the Customs union for its innovational development, such as a new LED filament stat-lamp. The given document is based on the tests on electromagnetic capability and safe usage of low-voltage equipment, that were held by VNIIIS A. N. Lodygina All-Russian Scientific Research Institute of Light Sources. It allows us to export LED filament stat-lamps to the Customs union countries. Our aim is to certificate this product for the EU countries. 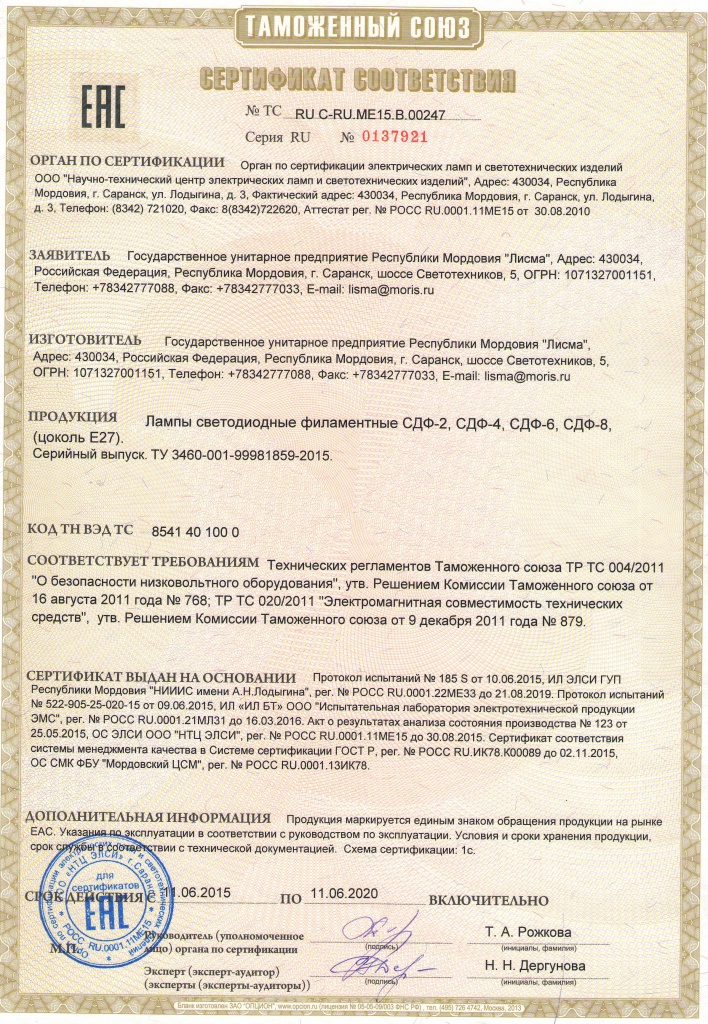 “Lisma” acquired the certificate of conformity, according to the European directive N 2006/95/EC, about the safety of low-voltage equipment for general purpose filament lamps, ornament lamps and thermal radiators. It allows us to export our products to the EU countries. By now, “Lisma” exports 15% of its production and we tend make this number bigger. 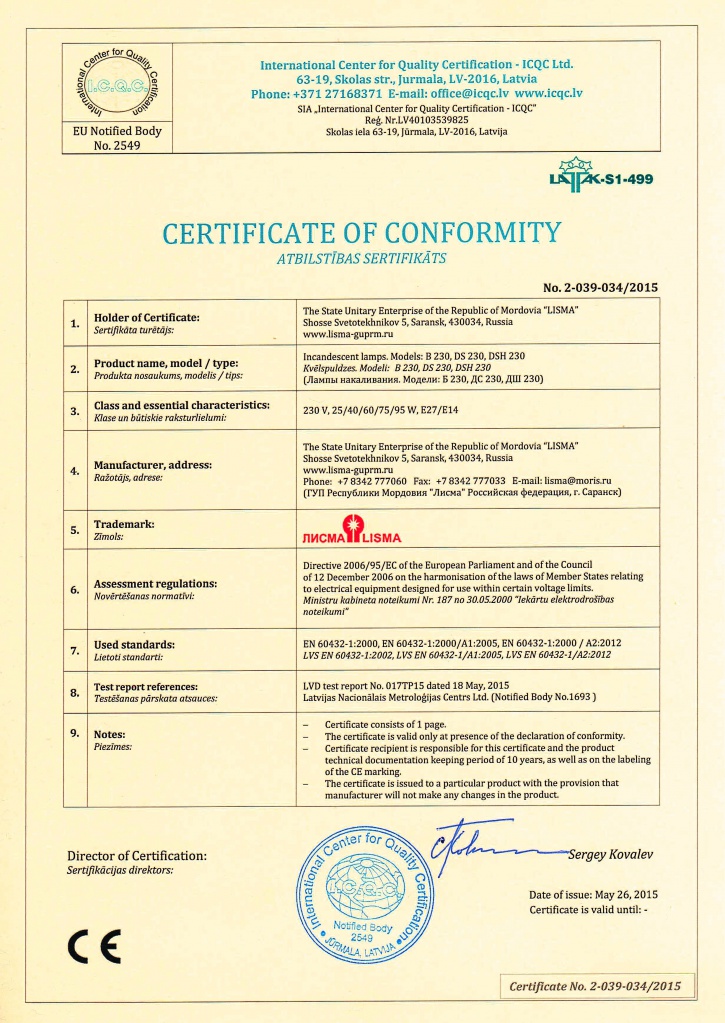 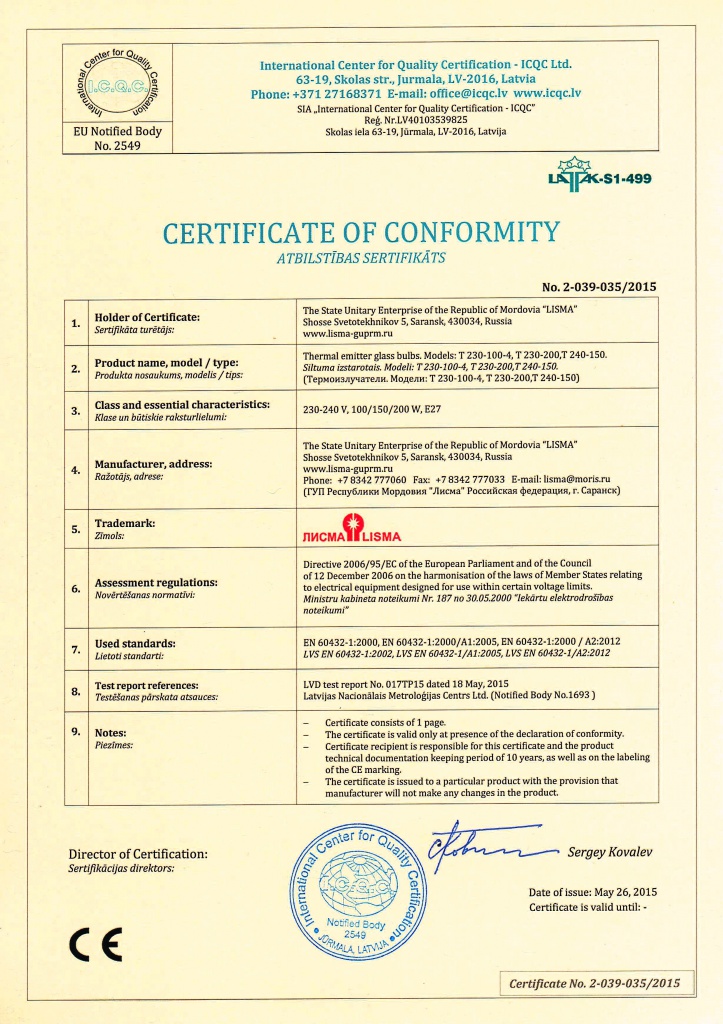 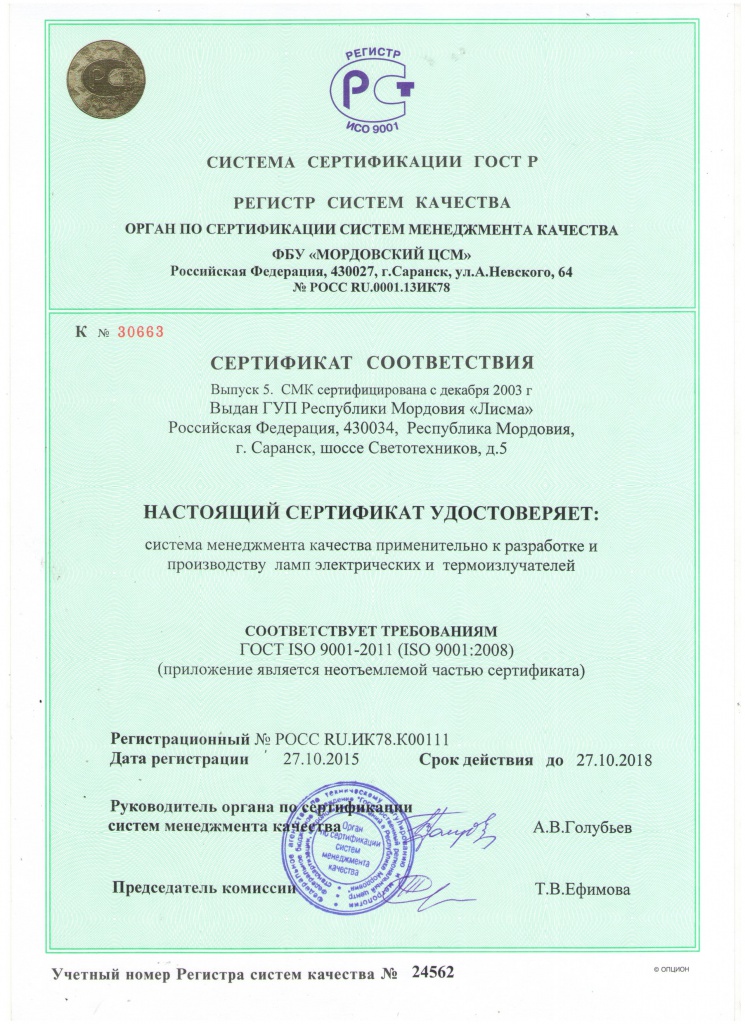 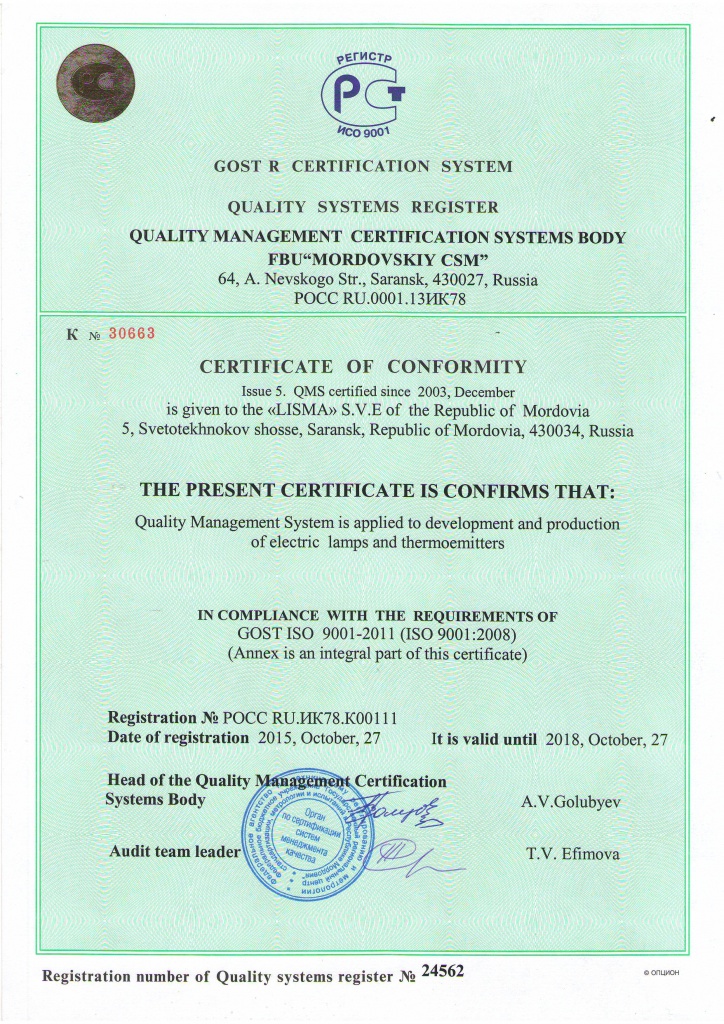 According to the results of the republican contest "Best Goods of Mordovia-2009" enterprise products deserved special attention on the part of members of the regional commissions and received high marks.
By the decision of the Regional Commission for the quality of lamps: metal halide high-pressure arc types DRI 250-6, 400-6 and DRI incandescent infrared mirror type ECI 215-225-175-1 it was put forward to the federal stage of the competition program "100 best goods of Russia" and were among the winners.